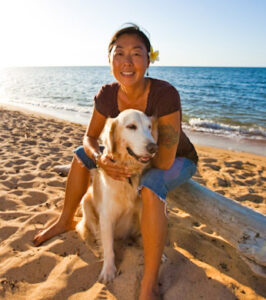 Kyoko has been training dogs and their people in Hawai‘i since 2008. Her love of dogs came from volunteering for various dog rescue organizations and shelters on the island. Since beginning her dog training career, she has earned various professional training and instructor certifications, including through Certification Council for Professional Dog Trainers, Karen Pryor Academy, and National Association of Canine Scent Work.

Her passion for scent detection began with a pet dog named Luka (pictured left) that didn’t like normal dog activities such as fetch, swimming and playing with other dogs, but absolutely loved and gained confidence through “nose work.” Since then, Kyoko has trained numerous pet dogs and handlers in scent detection.

Kyoko began her career as an ecological scent detection dog trainer and handler in 2012 through an O‘ahu wind farm’s habitat conservation program, which utilized canines to locate endangered seabird and bat fatalities to measure environmental impact. She went on to train and handle dogs for various conservation projects including: a study at Hanalei National Wildlife Refuge which measured the efficacy of utilizing detection dogs to lower avian botulism-related mortality in Koloa Maoli, an endangered Hawaiian duck; and a project that utilized detector dogs to monitor the eradication effort of invasive yellow crazy ants, a species that caused great harm to seabirds at Johnston Atoll National Wildlife Refuge. Kyoko continues to operate her private business Country Canine LLC in addition to serving as lead K9 trainer of Conservation Dogs of Hawai‘i. 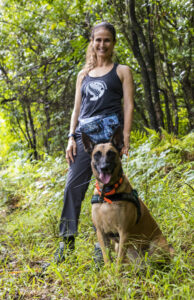 Roberta has been a dog handler and trainer with CDH since 2019. She and her dog Qana are founding members of CDH’s invasive species detection program and also one of its top performing teams. Roberta is also providing her expertise to develop CDH’s Maui K9 program and serves as a mentor to the dog-handler teams. Outside of CDH, Roberta is the K9 team lead at the Coconut Rhinoceros Beetle Response Team, a collaborative partnership with Hawai‘i conservation organizations that aims to eradicate the invasive insect from Hawai’i. As part of her position, Roberta supports the K9 teams with planning, record/data keeping, developing SOPs, training and surveying.

In addition to her K9 background, Roberta has a bachelors degree in biology and a masters in environmental sciences, and has over a decade of experience as an environmental consultant on the island of O‘ahu. 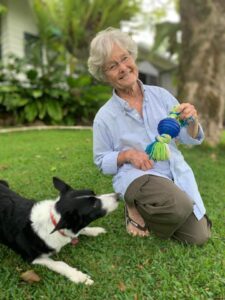 Sheila’s career in ecology and conservation in Hawai‘i has spanned over 50 years. At the University of Hawai‘i Mānoa, she served as the Chair of Zoology Department from 2001 to 2007, and as the Chair of the Ecology, Evolution and Conservation Biology (EECB) graduate specialization program from 1999 to 2001. As a researcher, she focused on Hawaiian birds, and has an extensive list of publications on their ecology, evolution, conservation and management. Sheila is also a Professor Emerita of UH, and her list of former graduate students includes many who are currently active and influential in the  conservation of Hawai‘i‘s wildlife.

In addition to her impressive academic career, Sheila is a long-time dog enthusiast. In the early 2000s when the use of conservation dogs was unheard of in Hawai‘i, Sheila trained her Border Collies to do seabird detection, and later went on to conduct a few field surveys with them. Sheila has also participated in numerous dog sports including obedience, tracking, agility (with four dogs!), nose work, herding, and conformation. She has also served as a judge for tracking and obedience trials. 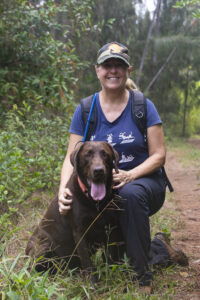 Julie’s experience in animal behavior and conservation spans more than 30 years. She has a BS in Biology with a focus on animal behavior. During her field research years, Julie studied seabirds, arctic wildlife from an oil drill platform, marine mammal behavior, distribution and acoustics in several ocean basins, and briefly worked with Koko the gorilla. Julie also worked for the state of Hawai‘i, maintaining O‘ahu’s hiking trails and working to combat invasive species. For the last 20 years, Julie has worked as biologist with the federal government, overseeing programs that focus on the protection of vulnerable marine and terrestrial species, and regulatory compliance.

Julie’s interest in scent detection started in 2017 when one of her Labrador Retrievers began to lose her eyesight and they began nose work classes. Both of her dogs enjoyed scent detection as a hobby from then on, turning their skills to amateur truffle hunting from 2018-2020 when they moved to Italy. When Julie returned to O‘ahu in 2020, she and her dog Ula joined CDH as a volunteer scent detection team. They are avid hikers and have been actively searching for devil weed on Oahu for the past two years, and look forward to expanding into other projects with CDH.

We have a constantly growing lineup of dog-handler teams. Below are dogs from past and currently active projects. 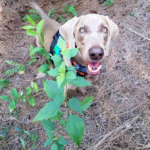 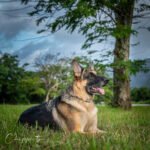 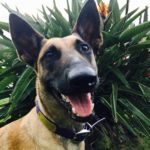 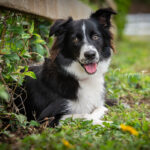 Thumbnail photos 2 and 4 by Chipperton Photography