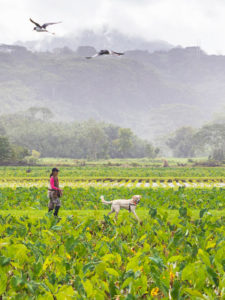 What: From 2020-2021 we were hired by US Fish & Wildlife Service to assist Hanalei National Wildlife Refuge on Kaua‘i with the establishment of their volunteer detector dog program and the certification of their K9 teams. Read more about the USGS study in which our lead K9 trainer Kyoko Johnson (independently of CDH) participated, that paved the way for this new volunteer program:

Why: The population of endemic waterbird and migratory waterfowl in the Hawaiian Islands has been greatly impacted by the more frequently occurring outbreaks of avian botulism. When certain factors such as heat, anaerobic conditions and protein source come together, the naturally occurring bacteria Clostridium botulinum (strain C) turns into botulism toxin. Avian botulism is in fact a food poisoning that the birds experience from ingesting large amounts of invertebrates that carry this botulism toxin. Once a waterbird ingests enough of the toxin, the bird becomes paralyzed and eventually drowns or starves.

Historically, wildlife refuge staff and volunteers have worked hard to quickly remove carcasses from their wetlands, but often the carcasses are located in areas of thick vegetation, making them hard to detect in a timely manner. Our goal is to enable wildlife refuges to utilize canine-assisted surveys, especially in thickly vegetated areas that may prove challenging for visual surveys. While the 2017-2018 USGS detector dog study results have not officially been published yet, we believe based on experience that canine surveys can complement human/visual surveys quite well, and contribute to a more thorough overall surveillance effort to prevent and respond to botulism outbreaks.

Where: Avian botulism has occurred on all the major Hawaiian islands, including Kauaʻi, Big Island, Maui, and Oʻahu, as well as on some remote islands such as Midway Atoll.  Kaua‘i has the largest population of the endangered koloa maoli (Hawaiian duck, Anas wyvilliana), the species most affected by avian botulism.

Mahalo to Friends of Kaua‘i Wildlife Refuges for underwriting our project!