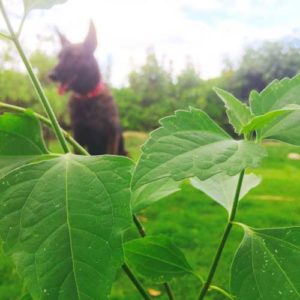 Who: This project started out with volunteer teams of pet dogs and owners, and now consists of professional teams. We have been impressed with the dogsʻ ability to lead their handlers to plants that are visually obscured by thick vegetation or distance (up to 90 meters away). We report all of our findings to O‘ahu Invasive Species Committee, and we receive their guidance on which priority trails and areas to survey. Our program is mainly based on O‘ahu but we’ve also conducted surveys for Big Island Invasive Species Committee.

Mahalo to Dogtra for providing us with a Pathfinder TRX GPS collar to support our field surveys!